De Pere’s downtown district, located on Main Avenue in De Pere, is rich in history. So is Baba Louies. Here’s a look back at the history of the bar and sand volleyball court. 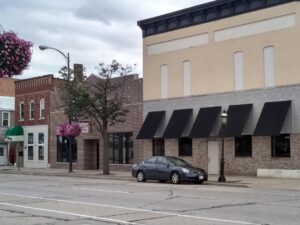 According to historic records, De Pere was once home to four movie theaters. The Pearl Theater and the Nicolet Theater sat side-by-side on Main Avenue. Those were the days of 10 cent movies, before televisions entered the scene. The Pearl and Nicolet theaters are long gone, and in their place is Baba Louies.
Baba Louies’ owner Jim Kropp bought the theater buildings in 1977. He initially rented them out before deciding to open a printing business inside one of the buildings. Eventually, he opened a pizza parlor.
Those both faded away, and in January 1988 Baba Louies opened as a neighborhood sports bar which now hosts pool, dart, and volleyball leagues on weeknights, and a dance club on Fridays and Saturdays.
In 1991 the building next to the bar was gutted to make room for a sand volleyball court. The massive sand court attached to the bar hosts volleyball tournaments, volleyball leagues, and special events.
A remodeling project in 1996 updated the bar top and created a storefront feature at the bar’s entrance where St. Norbert College jerseys are on display.
Although the theater is long gone, the De Pere bar that took its place continues its mission to entertain. Baba Louies is a nightclub where people can unwind, have fun, and escape from life’s troubles. The De Pere bar is a popular spot to meet friends, hang out, and enjoy the nightlife.
For over 30 years, Baba Louies has been an entertainment destination in Downtown De Pere where drinks are flowing and good times are rolling.